Every year, the Hokkaido Jingu Reisai or Hokkaido Shrine Festival is held on June 14th, 15th, and 16th. Many events are held in Maruyama Park, the location of the Hokkaido Shrine, which was built in 1869 and dedicated to the guardian deities for the reclamation of Hokkaido. Since the first festival in 1872, the annual fete has been observed except for twice during World War II. A parade of floats and portable shrines goes through the downtown area of Sapporo.

In my neighborhood, over 300 roten or vendor's stalls are set up in Nakajima Park, selling cotton candy, grilled octopus, choco-banana, French franks (on a stick dipped in a batter and fried), inflatable toys, goldfish--the same goods that have been sold at festivals since my students were children. The booths attract hundreds of people; most of the crows in Sapporo also gather in the park during and after the festival. Here are a few scenes from the festival:

Stalls selling cotton candy (above left and below right) and crepes are popular. When these photos were taken, on a Monday afternoon in 2003, it was far less crowded than on the weekend.

The rabbit clinging to this girl may have been won for her in a game by played at a stall by her boyfriend.

The plastic animated toy beside this little princess is almost as big as she is. 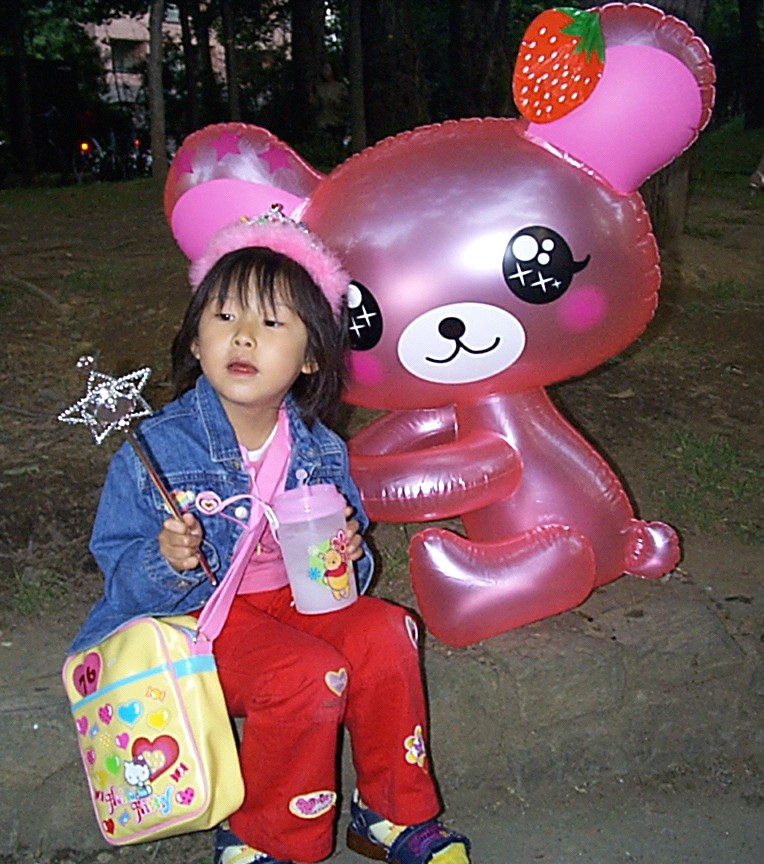 These "Cocolulu" girls dressed especially for the occasion.

My next door neighbors also sold cotton candy and franks, much cheaper than in the park from what I heard. All I know is that they used loud music to attract the customers from 10 a.m. to 10 p.m. for 3 days. (The sign says "Natural Health Food Shop," but the shop has cell phones on display and no food.)

The festival features an annual tour around the city of the gods on portable shrines, called mikoshi-togyo, followed by highly decorated dashi (floats) drawn by people in traditional feudal attire. One of the floats from the parade came into my neighborhood. (These photos were all taken from my apartment window.)

It stopped in front of a travel agent down the street and blared out some music, which may have been a kind of blessing for the shop. Of course, the shopkeepers are then expected to make contributions of money.

The float moves on.

More interesting photos of this and other festivals, complete with unique spelling, can be seen at the Asahi Net site.